I couldn’t resist buying some of the superb ACW buildings from Leven Miniatures. I’m not sure if I’ll ever use them in a wargame but they were fun to paint anyway.

I have a few others that I hope to paint eventually.

Email ThisBlogThis!Share to TwitterShare to FacebookShare to Pinterest
Labels: Scenery

Whenever I start a solo game I always think that it won’t be very much fun but every time I’m surprised at just how gripping it can be and this game certainly turned out to be a good one right down to the last turn.


Although it only lasted 10 turns the game had plenty of twists and turns with a Union victory in grasp on turn 7 that slipped away to a 7:5 victory for the Confederates. Although defeated, the Army of the Potomac did well having briefly gained Marye's Heights and giving the Rebs a tough run for their money on the left. The command restrictions imposed on the Union forces added an extra dimension to play and I may use the idea of ‘active’ and ‘inactive’ divisions again in future solo games.
Posted by Stryker at 11:14 6 comments:

Fredericksburg is probably not a great choice for a wargame for several reasons, firstly the size - it was the biggest ever battle on American soil (the only time the Confederates managed to field over 75,000 men) fought over a six-mile front. Secondly, the terrain, coupled with Burnside's unimaginative deployment of the Union army, means there is little room for manoeuvre. Thirdly, the battle had more in common with those of 1864 being a bloody one-sided affair.

That said, I have been wanting to try to game this fascinating battle for some time as I felt that although it might be a bit dull as a traditional game, it could possibly work well as a solo endeavour. Having read in detail about the campaign I realised that although the attack on Marye’s Heights was clearly folly, the Union had a real chance of success further to their left which the generals failed to exploit.

I don’t have enough figures to represent the forces unit for unit so have scaled the OOB down by omitting some Divisions from each side, even so there will be upward of 45 Brigades in play. I have also had to contract the battlefield slightly to allow everything to fit on my 6’ x 4’ table but all the significant terrain features have been represented.

The main sources I used to compile the scenario were Battles & Leaders of The Civil War Vol 3 and Time Life’s Rebels Resurgent.

Special Rules
1. The Union had a number of heavy artillery batteries posted across the Rappahannock and to accommodate these on the table I have had to increase the range of Union rifled batteries. Rule: Union rifled artillery has a range of 25”
2. The Union attacks on Marye’s Heights were made under tactical restraints imposed by the high command. Rule: Divisional attacks on Marye’s Heights must be made in column of Brigades with no units allowed to deploy to the flanks.
3. The canal in front of Fredericksburg caused problems for the advancing Union troops who became bunched as they crossed via narrow bridges. Rule:  It takes one turn to cross the canal and during this turn the Confederates +1 to all artillery die rolls.
4. Hazel Run was an obstacle that effectively divided the battlefield. Rule: Hazel Run is impassable terrain except via the bridge.

Command Restrictions
1. No ASSAULT orders may be given to any Union Brigade.
2. The maximum number of active Union Divisions is limited to 5. To activate any other Division a currently active Division must be ordered to retire and issued with HOLD orders. All orders are subject to the usual command die rolls (Burnside is graded as D, all other Union commanders are C).
3. Doubleday’s Division was tasked with holding the extreme left of the Union line and his Division may not be activated unless enemy infantry come within 10”.
4. D H Hill’s Division is held in reserve and may not activate unless enemy infantry come within 6”.

Victory Conditions
Union DEM = 6
Confederate DEM = 5
The union side claims 1 VP for each unbroken brigade on Marye’s Heights or penetrating as far as the Military Road.


Turn 15 was a night turn which meant I could re-dress the lines, bring on reinforcements and remove all shaken and broken markers returning units to good morale, I also allowed some limited SP recovery for units with 6SP’s or less.

The Confederates ended day one without taking Seven Pines so they started day two with a 1DEM handicap increased to 2DEM as they had 2 destroyed Brigades against 1 for the Union. This meant that the Federals had a small but significant advantage over the Rebels for day two.


The Confederate victory came slightly against the run of play and if I had finished the turn it is possible the Reb’s would also have reached their DEM level, however I felt that as they had taken the Seven Pines crossroads it was right to call the game in their favour.

The total SP losses were Confederates 89, Union 58. The most heavily engaged Confederate Division was R H Anderson’s veterans who lost 31 SP’s and had 2 Brigades destroyed (Kemper and Pickett). On the Union side Keyes Corps lost 29 out of 69 SP’s with one Brigade destroyed (Palmer), many of these casualties were incurred in the first few hours of the battle.
Posted by Stryker at 06:09 4 comments:

For the army OOB's I have drawn largely from the Fire & Fury scenario with a few tweaks from reading various accounts of the battle. The numbers in brackets on the OOB's are the starting strength points for each brigade, unusually in this fight the Confederate units are mostly stronger than those of the Union.

Army of the Potomac
McClellan


Victory Conditions
The Army Demoralisation Level (DEM) is equal to the current number of broken infantry brigades either on table or removed from play.

The DEM is reset on Day 2 but the side with the highest DEM score from day 1 starts with a DEM level of 1.

This blog is a campaign diary of my ongoing war against southern secession. My hope is that one day the Union will be restored and North and South can live together in harmony. 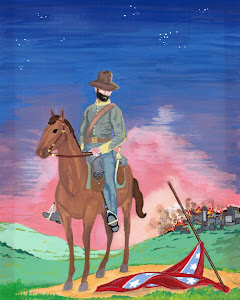